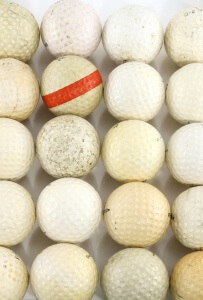 A golf ball weighs between 41 and 45 grams, the maximum weight is 45.93 grams. But that was not always the case, because golf balls had different weights in the early days of the sport. For example, the weight of the first leather golf balls was hardly regulated at all, whereas very careful attention is paid to how heavy golf balls are since they consist of gutta-percha or plastic. This has been so since the mid-1970s. And of course there are still exceptions to the rule: the Cayman golf ball from the 1980s, for example, weighs only about 20 grams, because with it it is particularly possible to exact hitting on short distances. A normal golf ball, however, must never be heavier than 45.93 grams. So much emphasis is placed on this, as it would be simply too dangerous for players and spectators to have lots of different heavy golf balls. The player would estimate the weight of a ball too quickly and would be unnecessarily jeopardizing himself and others.